Recently, Leo has been complaining that his school doesn’t teach a lot of history. So we’re doing what we always do, and looking for ways to expose Leo to history outside of school. Summer camp has always been a great way to pursue his many interests.

This year my research uncovered some history camps I hadn’t heard about before. These are all in the Philadelphia area, but they offer clues for how you could track down similar camps in your own region. You can check with local museums, historic houses or estates that offer educational programming, and private summer camp outfits that offer themed weeks. Even science museums and science camps sometimes have a historical component.

Here are some of the Philadelphia-area camps I’ve found that have a strong history focus. 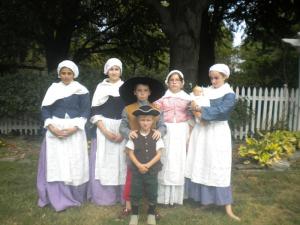 This small multi-age camp is held in an artist’s studio in the mornings, where the focus is on telling stories with art. In the afternoons, the kids go to Grumblethorpe, a historic house a few blocks away. At Grumblethorpe, the kids learn 18th-century hand crafts like making soap and sewing pockets, and every day they make an 18th-century food item. They bake bread, churn butter, make fruit preserves and ice cream. Leo’s favorite thing about Grumblethorpe is the bloodstain on the floor of the house’s front parlor, where a British general died after the Battle of Germantown during the Revolutionary War.

This house is just up the road from Grumblethorpe in Philadelphia’s historic Germantown neighborhood. I just learned about their history-based summer programs. The first week focuses on Native American history, the second week is about colonial history, and the third week is all historical farming techniques and food preparation. Wyck House has a beautiful garden and a chicken coop, and Leo enjoyed making cider there when he visited on a school field trip a few years ago.

This camp is based at St. Peter’s Church in Center City Philadelphia. It’s a solid week of field trips to the city’s most patriotic and touristy historic sites–the Constitution Center, the Liberty Bell, and the Betsy Ross House among many others. The camp has a half-day option, but we’ve decided not to do it. I would rather have Leo see these sites with us, so we can talk about the parts of Philadelphia history that are glossed over in the big tourist traps.

Who knew a museum known for science would have an interesting history camp? This week-long camp is held outside the city at Valley Forge National Historical Park. Campers will learn about the natural history of the area, and also the history of the park itself including “the science behind historical battles.” I sort of wish I was in grades 3-8 so I could do this camp myself.

This full day summer camp is mostly science, but it does offer a couple of weeks that focus on local history, including the Lenape Indians [PDF] who lived in this area before the colonists came. Younger kids go to the Academy of Natural Sciences to visit their dinosaur dig exhibit, and older kids go to the Museum of Archaeology and Anthropology at the University of Pennsylvania.

We’re going to sign up for at least one of these camps, but of course the perfect history camp for Leo doesn’t exist. Matthew is thinking of using a bit of vacation time this summer to create a do-it-yourself history camp for Leo. I’m sure he’ll blog about it as the summer approaches.

That’s my list! I’d love to hear about any local camps I might have missed. You are also invited to make me jealous by telling me about all the great history camps available in your area.